The setting is a windy , but  gorgeous day at  Arrowhead Stadium (Home of the Kansas City Chiefs) the   Blue Tigers  opened the 2014 Season in the Missouri Classic which turned out to be a classic against the Lions of Langston! Unfortunately for the blue and white it was the Orange and Blue that came away with a 49-48 win ! 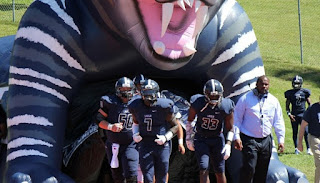 The name for the Blue Tigers  was  "Morris"  as  in  Senior QB  Jacob Morris who completed 18 passes for 301 yards and 4 TD's , While Senior  RB Morris Henderson went to the house 3 times and one time was 91 yards on a kick off return!


In 2014 the Blue Tigers Passing attack was lead by Senior Owen Jordan,  Senior Jacob Morris played one game , While then 6-2 Freshman  QB Dennis Vinson was bidding his time and May look to take over behind the center in 2015.

The Tiger Backfield ? Well that belonged to Senior Running back Morris Henderson !

Junior Linebacker Treston Pulley will be a Senior in 2015 and may be the leading tackler after finishing  2014 with 83 Tackles but Jeremy Rives and Paul Dodson also return for their Senior season as well. Rives,Dodson and Pulley were the top three underclassman tacklers in 2014!

2015  Schedule All times are LOCAL and subject to change

Players Who Have Signed National Letters of Intent (NLI)

The Delta Devils started the season with a 32 -7 over the University of Faith in Ita Bena in September. Faith is what the Red & Green needed coming into the 2014 season as head coach Rick Comegy was in his first year at MVSU!

Unfortunately  Faith was not enough as Mississippi Valley state went on to lose  their next  5 games ( Illinois State,Alabama State, Alcorn State  Alabama  A&M and Texas Southern )by a combined score of 203 to 99.

The Delta  Devils stopped that 5 game losing streak with a huge win 27-23  over Jackson State a team they had not beaten since 1994, thus putting an end to a 19 game streak of futility against the Tigers.


QB Quantavius Peterson (SWAC Newcomer of the Year)  stepped into the Jackson State game and connected with Joshua Rice for a 36 yard TD and an MVSU  victory ( the QB combo of Peterson and Patrick Ivy lead  the Delta Devil offensive attack this season).


Peterson who returns in 2015  for his senior season may be the arm the Delta Devils rely on unless he gets competition from 6'2" redshirt Junior Dontrinell  Scott.
Recent signees 6'1"  185lb  "EJ" Faison who threw for 2300 yards in his senior season at Norview HS in Norfolk,Va in 2014  or 6'4" 220lb Slade Jarman out of Pensacola,FL may give Peterson competition as well,but its too early to tell at this time.One thing is for certain Patrick Ivy was a senior and will not be back .


Leading the ground game for the Delta Devils was Peterson ,Redshirt Junior running back Jerrell Moore (who only played in 6 games in 2014) who had 352 yards on 52 carries. MVSU also had ground support from Jeremy Dobson,Charlie Crenshaw and  DeShawn Davis.


Senior wide out Julian Stafford  who lead MVSU with 981 yards receiving and 9 touchdowns will not be around in 2015 and neither will  Trey Ford  (10 catches 180 yards). Coach Comegy may look to talented receivers like Joshua Rice,Joshua Banks,Keenan Daniels and Charlie Crenshaw.


Defensively the Devils defense was lead by the Jones gang! Le' Trey and Davon  amassed 119 tackles between the two of them  as well as 3 sacks and 3 interceptions! Davon Jones a 6'3" 226lb senior LB will not be back in 2015  and Le'Trey  Jones  a 5'9"  Junior Defensive back will have to find another partner  to help him hold it down next season.

Coah Rick Comegy will lead Mississippi Valley  State into 2015 loading up with new talent and working his magic to create a team that will finish up surprising many fans! The schedule is not an easy one but with Coach Comegys track record and his ability to convince players to buy in to his program 2 wins in a season will be a thing of the past.

2015 Schedule All times are LOCAL and subject to change