The Tigers Capped off a winless campaign  with  a 64-0 loss to BYU in Utah !
The orange and blue have not won since September 14,2013 (Fort Valley State  27-20) and are currently in the Midst of a 21 game losing streak !  Head Coach Earnest Wilson III does have bright spots to look forward too in 2015 !

Coach Wilsons'  Tigers played Norfolk State tough this season before losing 14-7 in Savannah . The Young Tigers actually got their stripes playing FAMU  strong in Tallahassee before dropping that game 24-14 !

Coach Wilson can also find something to smile about in 2015 ! He has Three signal callers returning ;Yes I said  1-2-3 ! Smith , 6-4 Soph Leon Prunty  and 6-2 Ker-Sean Wilson  all return with  experience  from this season !

As for the QB Targets in 2014 Cantrell Frazier lead the way in Grabs,Yards and average yards per game ! While Jeremiah Harris joined Frazier  leading the orange and blue with 3 TDs. 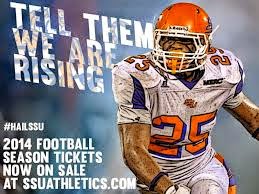 The only reason the Tigers are here on this poll is because they played and lost  more games than the  teams who are ranked a little higher!I believe despite going winless this season,Coach Earnest Wilson III will have his Tigers Roaring in unison  "We Started from the bottom now we're here!" in 2015 !